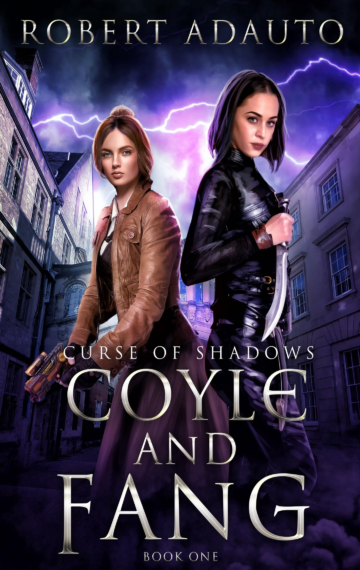 $2.99Buy Now!Read A SampleSee The ReviewsSee The Full Series

The fate of mankind rests in the hands of a brilliant detective and a deadly vampire.

Sherlyn Coyle is betrothed to the man of her dreams when she discovers he’s an infamous serial killer. He leaves her alive, but barely. Facing nightmares fueled by her encounter, she pursues a career as a detective to bring him to justice.

Fang is a vampire enhanced by military scientists to become an unkillable assassin. She struggles with a past she can’t remember and fury against those who created her. And she just broke out of her cage.

They’re hired to find the people who stole an ancient book of curses. But, they discover things are never that simple as they face a world much more dangerous than either could have imagined. Between enemies within and enemies without, can Coyle and Fang find the book before it kills hundreds of thousands?

Coyle and Fang: Curse of Shadows is Book One in a series of action-packed, thrilling adventures set in the 1890s. In the spirit of Robert Ludlum’s The Bourne Identity mixed with historical fantasy, Curse of Shadows will keep you turning the pages until it’s thrilling conclusion.